Last summer, I read an article about a woman who took her seven year old son on a “transition trip”. Both of them needed to process the divorce their family went through and because her son was turning into a little man, she decided to take him on a long hike to re-connect. For 41 days they walked from Paris to Santiago de Compostella. They talked, they laughed, they cried, they carried on even though it was hard sometimes, pushing their boundaries. Together they made memories for later.

The article inspired us to tackle a completely different transition we were going to face this year: our daughter’s so-called ‘spring party’, the alternative scenario for a holy communion, which is common for kids who weren’t baptised or who aren’t religious, at least here in Belgium.

We didn’t feel like giving an extra party with often little true value and often too many presents. But the idea of a challenging – out of the ordinary – trip with just the three of us, sounded as a better alternative. Even for daughter too, after discussing why. What do you do on such a trip? Things you’ve never done before, push your boundaries, alone and together as a family, overcome certain fears… And where can you do all of that? We considered walking or biking to Paris,  a death ride in the Ardennes, a road trip to  Count Dracula’s castle in Romania, …

We finally picked São Miguel in the Azores.

I have to admit, I never heard of this little archipel, until I spotted it as a new destination on TUI fly, with whom we booked our flights to Miami last spring. The ‘Hawaii of the Atlantic’ – the nickname of the Azores’ largest island, Saõ Miguel – only recently became accessible for low cost airlines and is one of the most unspoiled, exceptional places I have seen for a long time. One moment you feel like you’re wandering in Canada, then in Brazil, often in Ireland or Scotland, but also in Japan and this in an area not bigger than 759km2 . Add breathtaking views, one of the largest whale populations on earth, dormant volcanoes, pitch black lava beaches, steaming geysers, bubbling hot springs, high volcano peaks and azure lakes, delicious queijada pies,  a great street art culture and a slow lifestyle we can only dream of, and it’s clear what a great destination Saõ Miguel was for the type of trip we had in mind.

We’re more a family of strollers than true hikers, but strollers who can enjoy a good, long walk. Be it more often through a city center or museum than a forest or jungle. For her transition trip, our daughter really wanted to climb a mountain – not really rock climbing – rather a long quest that would bring her to a beautiful, breathtaking destination. And she also wanted to do something with animals … The more we planned, the clearer it became that even her father and I would face a couple of challenges and experience ‘first times’. 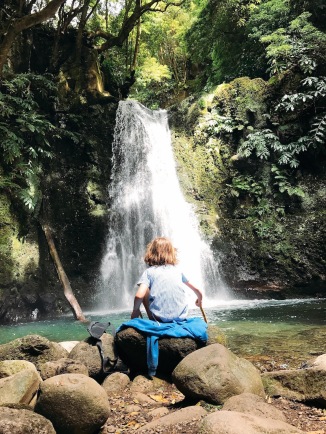 Such as a long hike through tropical forests, along narrow paths and overgrown bridges to a hidden waterfall.

After the roughest boat trip ever, drenched and numb from the cold water, snot all over our face, spotting a mother fin whale and her calf cheerfully blowing in the ocean.

Feeling like a king, queen and duchess – to not to say princess – standing on a breathtaking viewpoint overlooking the whole island at your feet.

Attempting to break a deadlock with a wild forest rooster that was clearly attached to its territory.

Soaking for hours in natural hot springs full of orange coloured water, leaving not only marks on your swimsuit, but also on your skin, making you as orange as Trump or an Oompa Loompa.

The stunning meter-high fern trees and other giant plants that would perfectly fit in any dinosaur movie.

A trip to an abandoned hotel where we let our imagination run wild. 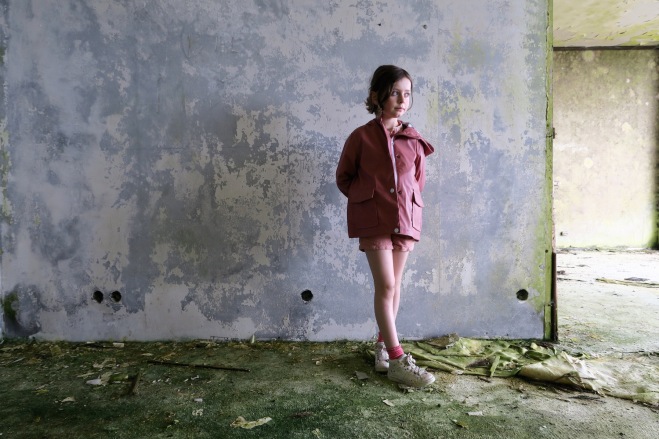 Climbing over a pile of arty seawall blocks to enjoy a better view of the ocean.

Buying some delicious handmade queijada cheesecakes, and secretly getting some freshly baked ones from the old women who make them with so much pride. 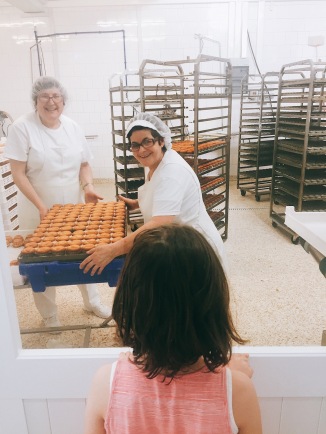 Meet complete strangers – found via Instagram – to talk about parenting in the middle of Atlantic Ocean and feeling so welcome.

Encountering the estranged Romeiros several times, during their 8 day pilgrimage, singing and praying for the many churches of the island to redeem themselves from evil.

Enjoying the deafening silence on the banks of a hidden green colored lake, only with the three of us.

Feeling so happy after being cuddled by a calf born only a couple of days earlier, making you realise how distant we are from nature in our daily lives.

Feeling literally four seasons in a day, with the temperature shifting from 20 to 4 degrees, and staring at the thick fog rolling down the volcano peeks.

It might all sound frustratingly perfect. But the three of us could not have imagined a better trip and destination for this moment in our lives.

We talked, we laughed, we shivered from the cold and got really sweaty together. Some of us got scared, some of us got tired, others were in pain sometimes, but we carried on, joking and humming Survivor’s “The eye of the tiger” which made our daughter furious every single time… We made memories together. And forgot all about the spring party craze.

Can’t wait to discover São Miguel and the Azores with your kid(s)? TUI fly will take you there in a very comfortable 4,5 hour flight directly from Brussels. And hurry, for the cheapest tickets are selling out fast!

Do you consider booking and are you looking for tips and tricks? Drop us a word and we’ll be happy to share all the hidden gems we discovered.